The single plate, dry disc clutch is mounted with a free sliding fit on the Syncro-Mesh Transmission mainshaft. Engagement of the clutch is accomplished by a spring loaded pressure plate which forces the driven plate against the flywheel.

Torsional vibrations from the engine are pre­ vented from being transmitted to the transmission by coil springs mounted in the hub of the driven plate. Balance is obtained by means of narrow sheet metal strips crimped around the webs of the driven disc; grinding of the edges should NOT be attempted as a means of balancing. 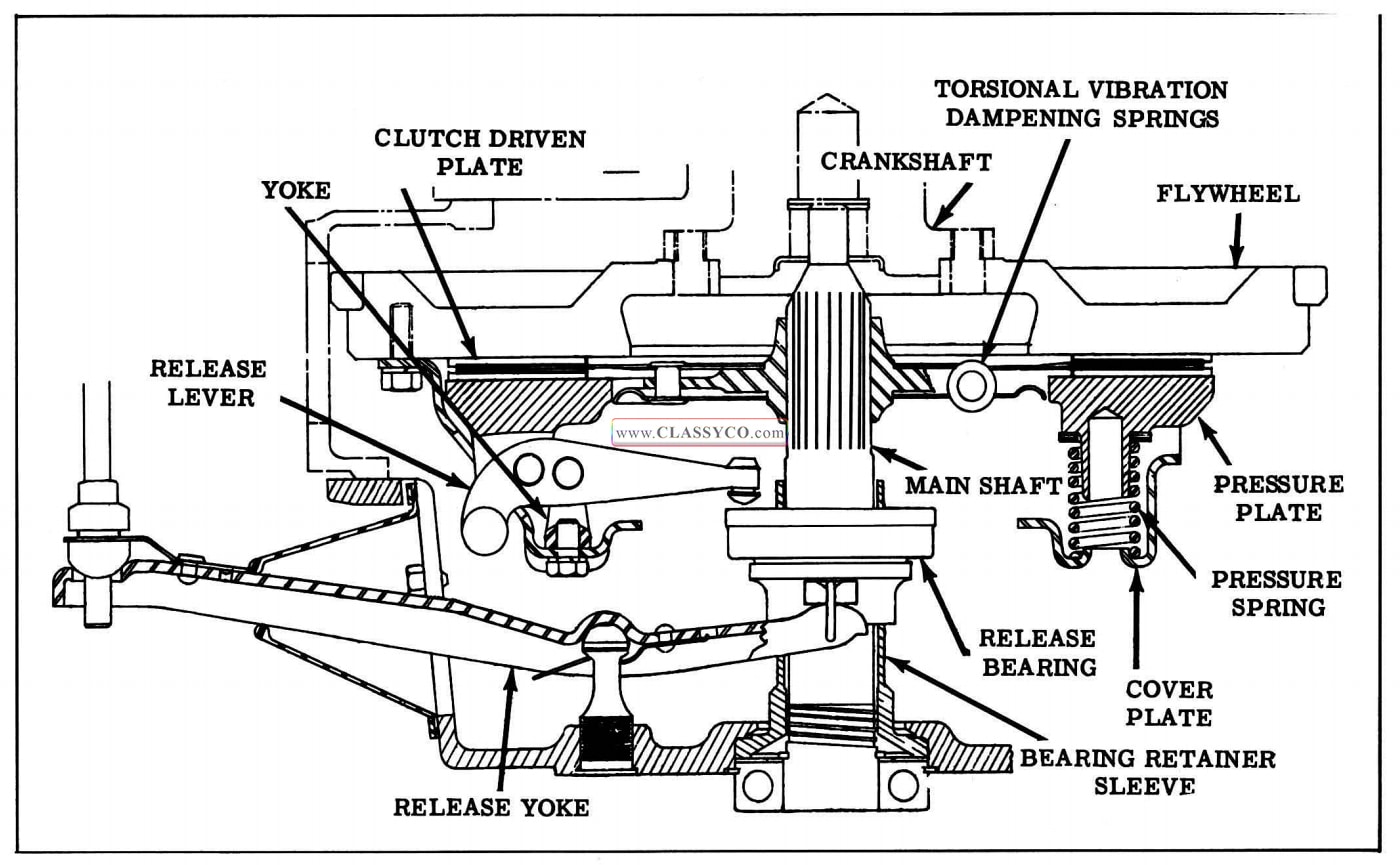 The clutch auxiliary · shaft is so designed as to permit engagement and disengagement of the clutch without being affected by engine movement on its flexible mountings.

The assembly consists of a stamped steel auxiliary shaft with a pivot pin at each end, three integral arms, and a combination clutch pedal pressure reducer and return spring.

The auxiliary shaft floats in both of its two sup­ porting brackets, and endwise shaft movement is kept within reasonable bounds by felt washers.

The combination pressure reducer and return spring attaches to the third auxiliary shaft arm and to the second frame cross member.

A high pressure lubrication fitting is provided on the underside of both the clutch and brake pedals for their lubrication.

Clutch pedal free travel is the distance from the released position to the point where the release pearing contacts the clutch release levers. (When additional effort is required to move the pedal)

If the clutch pedal free travel is outside of the above specification, loosen the lock nut on the adjustable rod and turn adjusting nut until free travel is correct, then tighten lock nut. (See Fig. 10-2) 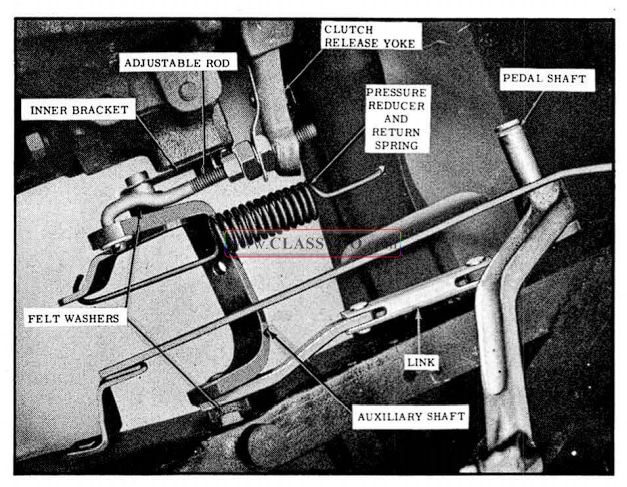 To remove the clutch auxiliary shaft proceed as follows:

To replace, reverse sequence of operations, lubricating felt washers at each end of shaft and making sure that all parts are free. Adjust clutch pedal free travel. 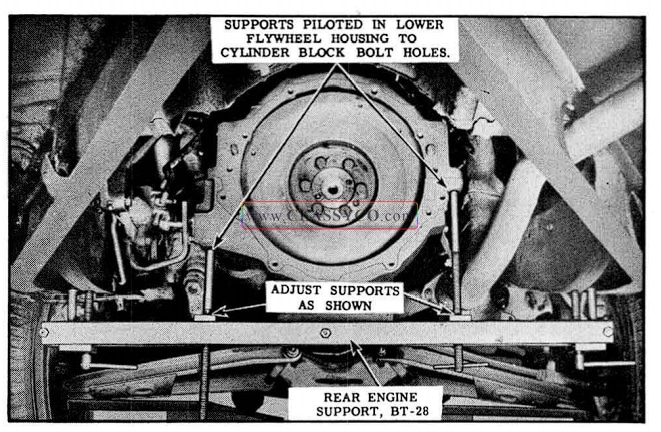 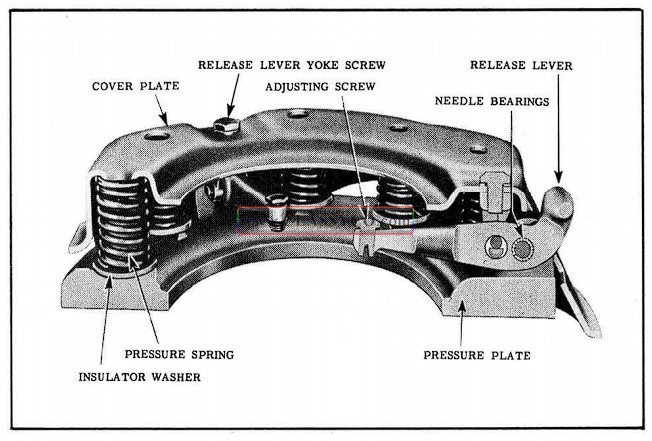 NOTE: Installation of clutch driven plate facings is not recommended, as it is difficult to obtain balance and flat parallel faces.

If the levers are more than .025″ out of plane or do not lie within the .0000″ to .0625″ below the center boss, it will be necessary to adjust the release lever screws as follows:

a. Using a standard hack-saw blade, remove the original stakes from the required release lever adjusting screws.
b. Adjust screw (or screws) until all levers are within.015″ of each other and lie not more than .0625″ below the level of the gauge center boss.
c. With head of screw resting on a solid block use a blunt chisel to restake the screw to the lever. A lever can be restaked only once because of the limited stock around the adjusting screw, and it will be necessary to replace the lever if, after the first restaking, the adjustment is incorrect.
d. Recheck release lever adjustment as outlined in steps 1 through 5.

To remove the clutch release yoke, proceed as follows: 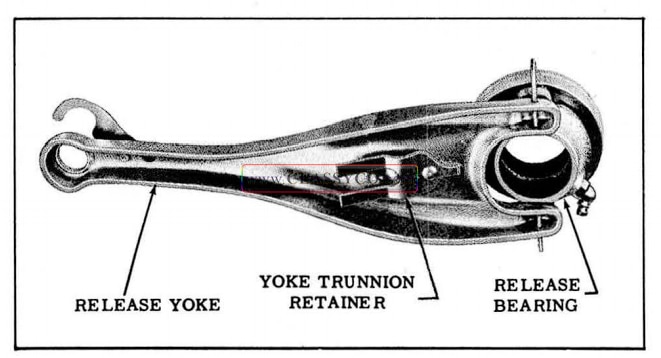 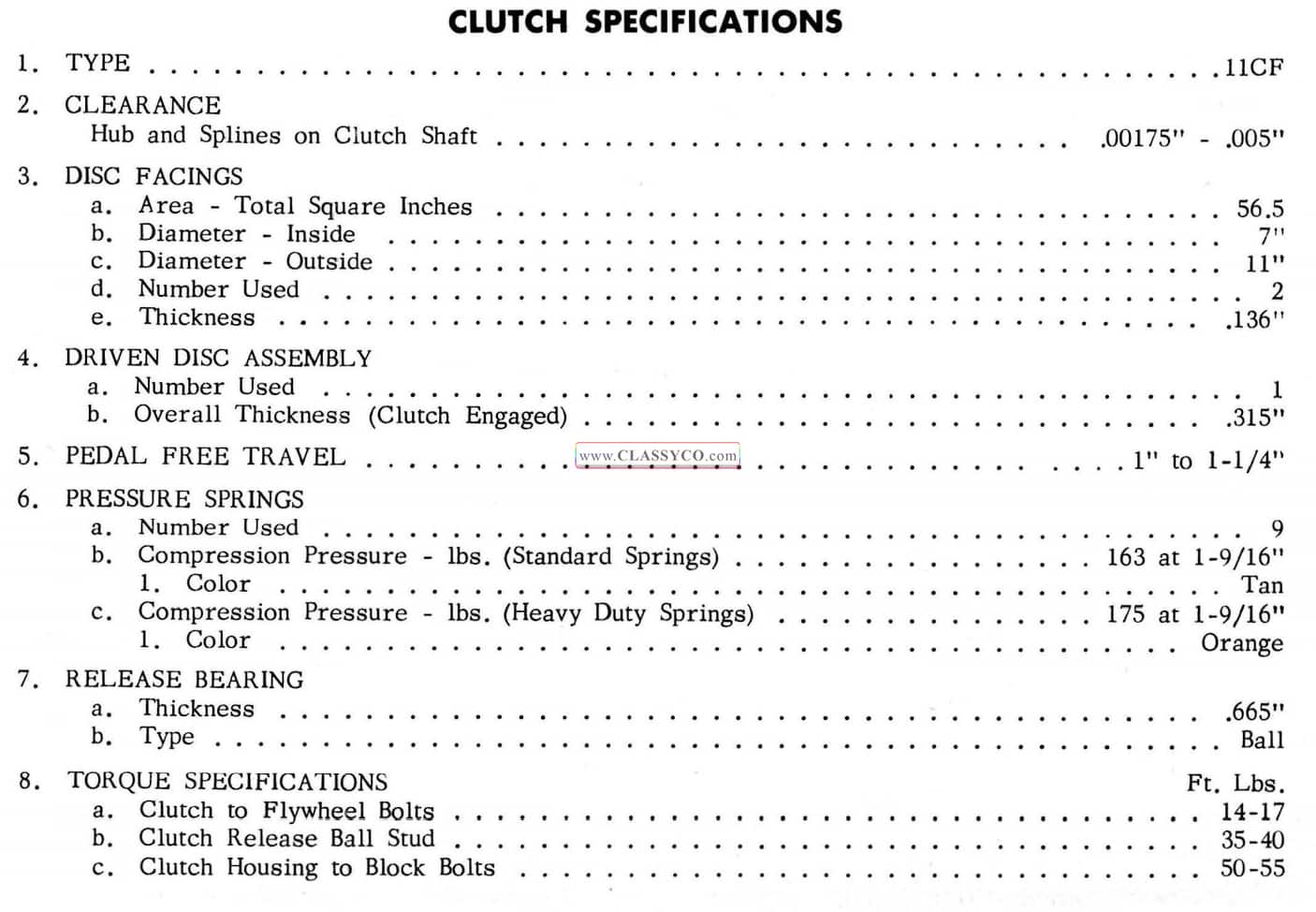