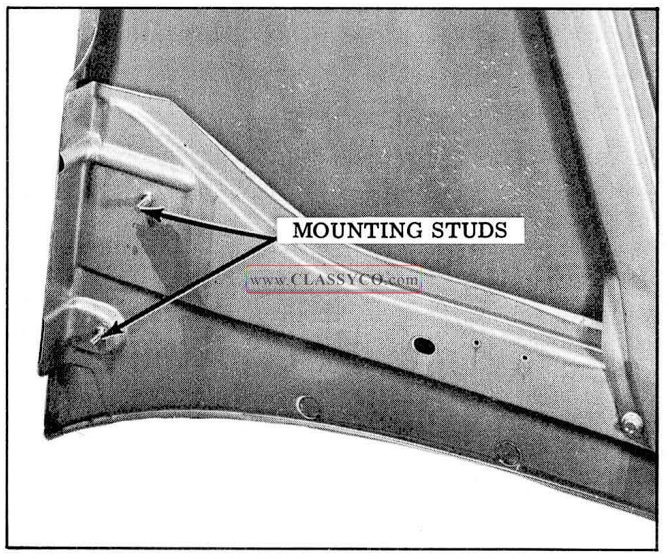 The hood hinge is a gear -type, two-link hinge with an over-center spring, which provides hold­ open force and assistance in opening and closing the hood.

The hood hinge adjustment provides lateral and vertical alignment of the rear edge of the hood. All hood hinge- to -cowl mounting bolt holes are enlarged to permit movement for adjustment.

After aligning the hood hinges, the hood pilot bolt and rubber bumpers should be adjusted. The pilot bolt, on we under side at the front of the hood, aligns the hood as it is lowered. Vertical adjustment can be made by loosening the pilot bolt lock nut and adjusting the threaded pilot bolt up or down. The distance between the lower edge of hood and top of primary upper bar should be approximately 1″. (See Fig. 16-4) Tighten lock nut after adjustment is completed. The rubber bumpers at each end of the fender tie bar must be adjusted for alignment of the corners of the hood with the fenders. The latch assembly, located at the center of the fender tie bar and tie bar support, has enlarged mounting bolt holes to permit movement for lateral hood alignment. The gap between the side of the hood and the front fender should be 1/8″ maximum. (See Fig. 16-4). 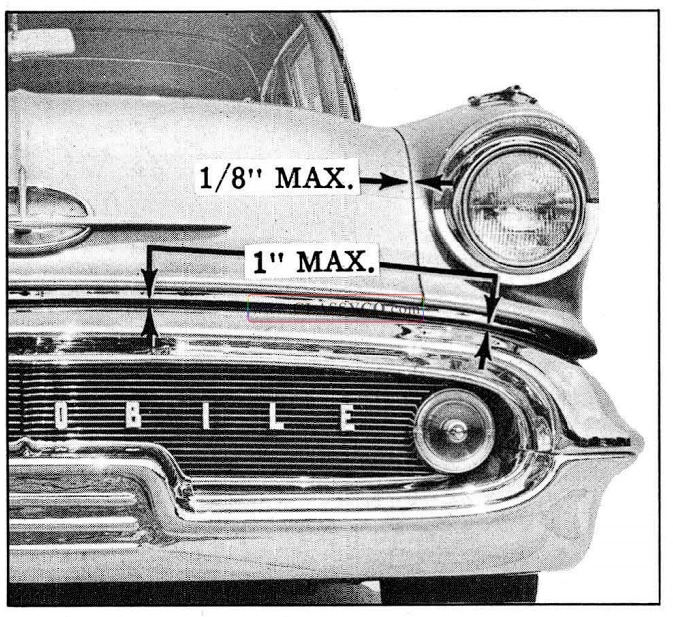 NOTE: Place protective covering over cow1 and fender areas to prevent damage to paint and moldings when removing or replacing hood.

To install, reverse above sequence of operations and check hood alignment.

NOTE: The mounting stud holes in the hood support bracket are slotted to provide a slight fore-and-aft adjustment. 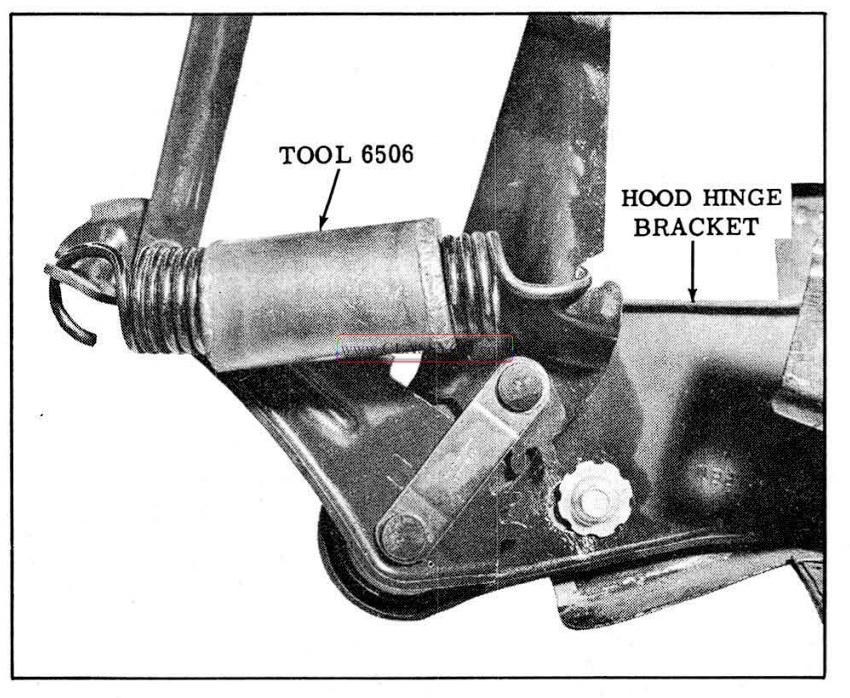 Vertical and horizontal alignment of the front bumper assembly is provided tor through the use of eccentric bolts attaching the secondary bar to the frame. (See Fig. 16-6) 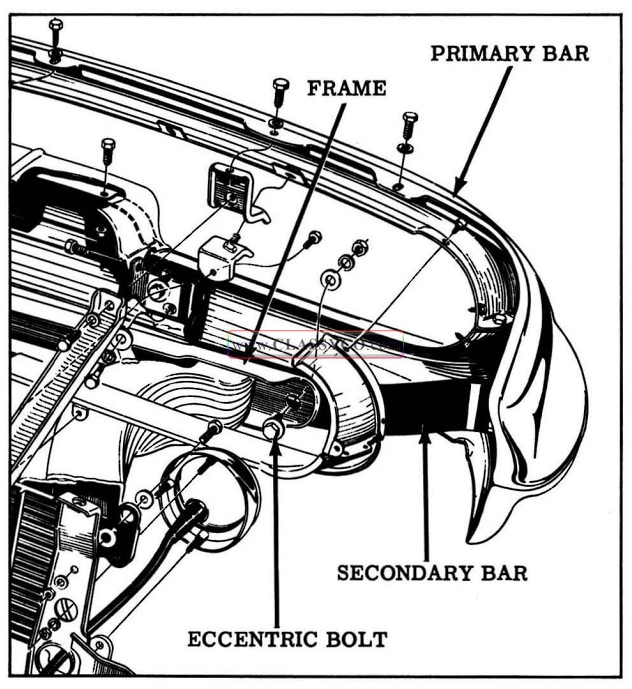 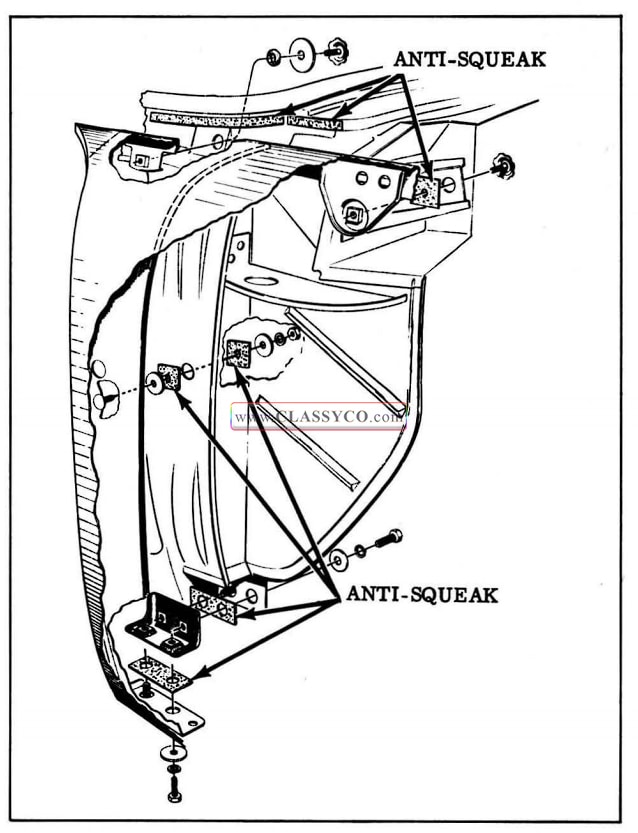 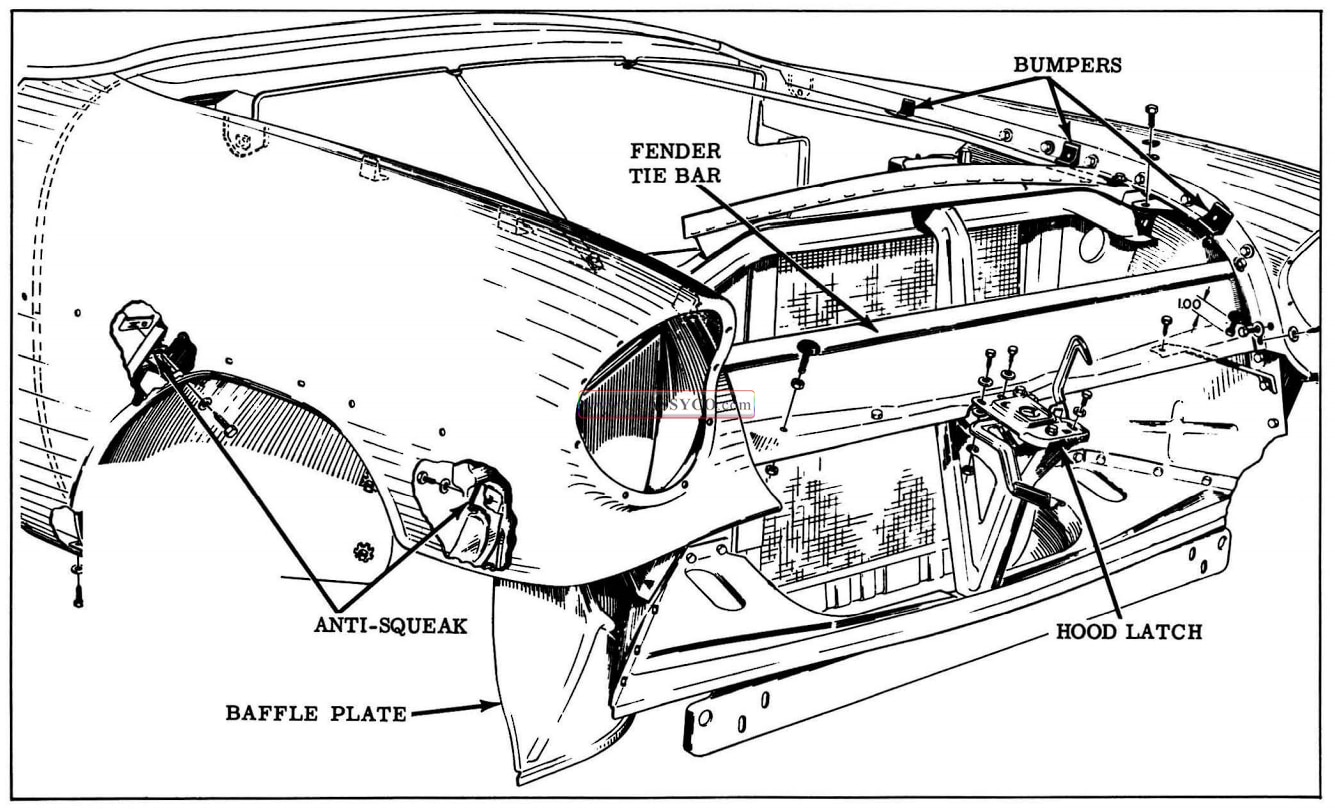 The holes in the body and cowl are enlarged to permit adjustment. When making installation, fender should first be placed firmly into position, and before replacing any bolts, make sure the r ear end of the fender matches the contour of the door. This adjustment is made by use of shim washers on the stud at the rear center of the fender. (See Fig. 16-7) After this contour adjustment, install and tighten all fender bolts just enough to permit shifting as required. After fender is properly positioned, tighten all attaching screws and bolts. 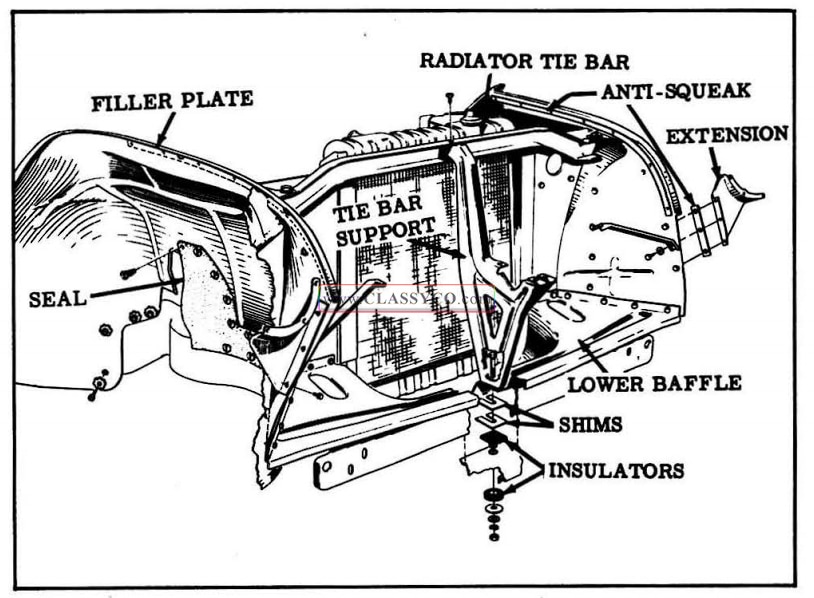 All necessary wiring and parts should be dis­ connected or removed before removing the filler plate. It is important that all seals and anti-squeaks be checked and replaced, if necessary, before installing.

NOTE: After the voltage regulator has been reinstalled, the generator must be polarized. (See ELECTRICAL Section)

The top, left, and right radiator baffles can be removed without removing any other sheet metal parts. After removing all attaching screws, the radiator side baffles may be removed by lifting them straight up. To remove the lower radiator baffle, the bumper assembly and fender tie bar support must be removed. 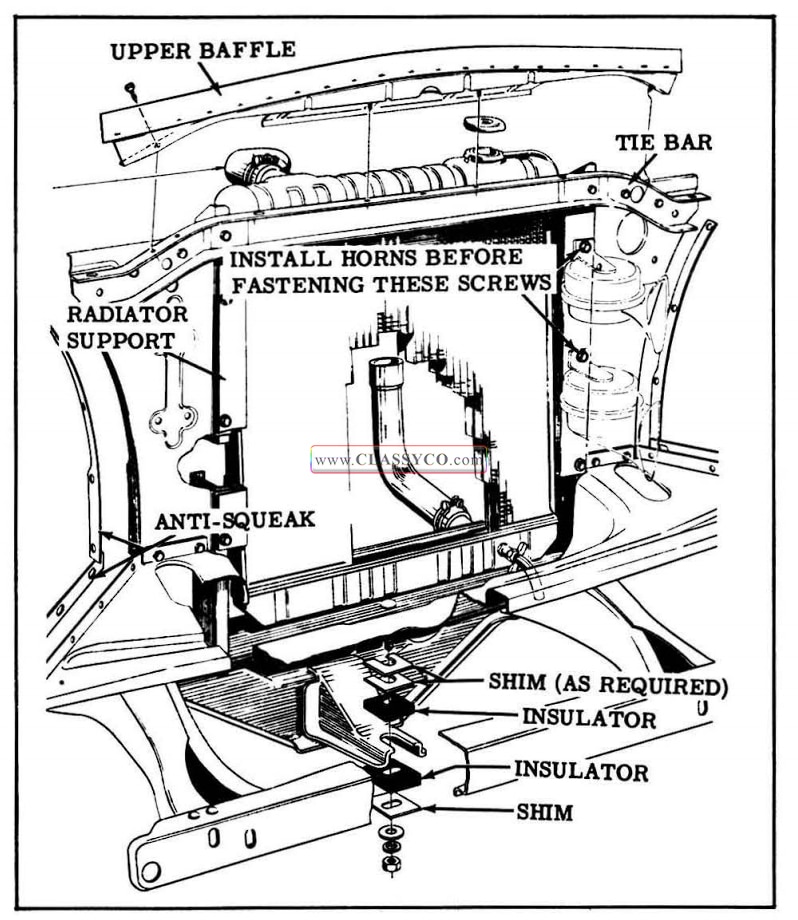 When removing the ornament or molding, unscrew the self-threading nuts, taking care not to break the studs. New nuts should be installed by screwing them onto the studs with a suitable tool.

The hood emblem is fastened to the front of the hood by six stud bolts and lock nuts and two self­ threading nuts, all of which are accessible from the underside of the hood. The self-threading nuts should be removed as described under HOOD ORNAMENT AND MOLDING.

The front fender side molding is retained by seven sheet metal “Pal” nuts which thread onto “T” bolts in the molding retainers and 2 sheet metal pincer type fasteners.

To facilitate removal of moldings, script, or ornaments, disconnect the fender to gain access.

Outside air enters the ventilating and heating system through the cowl inlet at the base of the windshield. The flow of ventilating air is regulated by the air control located on the instrument panel at the right side of the steering column bracket. (See Fig. 16-11) The push buttons on the ventilation control panel regulate the left and right out­ side air valves and the inside doors in the heater when no heat is desired.

When the Medium button is pressed, the right hand outside air valve opens, closing the heater master switch and starting the blower. This provides outside air ventilation through the heater. The water valve remains closed. The louvers are held open by springs. When the Maximum button is pressed, the right and left hand outside air doors are open and the master switch is closed. In addition, the diaphragm on the top of the heater opens the two inside doors to permit maximum ventilation.

Cars without heaters are equipped with a push-pull control cable for left side ventilation.

All air valves and the heater louvers are operated by springs and vacuum diaphragms which are controlled by the push buttons. Vacuum is obtained from a “Tee” connection in the windshield. wiper hose.

The outside air valves are closed by spring force and opened by the diaphragms. The louvers in the heater outlets are pivoted open by spring force and closed by two diaphragms. The louvers in each outlet are connected by mechanical linkage so that they open in opposite directions. One of the diaphragms closes the louvers partially; the other closes them fully. When the “Direct” button is pressed, the louvers open fully. The “Indirect” button closes the outlet halfway and directs the air along the sides of the car.

Two doors inside the heater have fixed openings which allow a predetermined amount of air to flow when either heater button or the ”Medium” ventilation button is pushed. They open completely only when the “Maximum” ventilation button is pushed. An auxiliary switch mounted on the right hand out­ side air valve housing prevents operation of the blower unless the heater, defroster, or ventilation is in operation. (See Fig. 16-12) When the air valve opens, the switch closes and the blower starts. 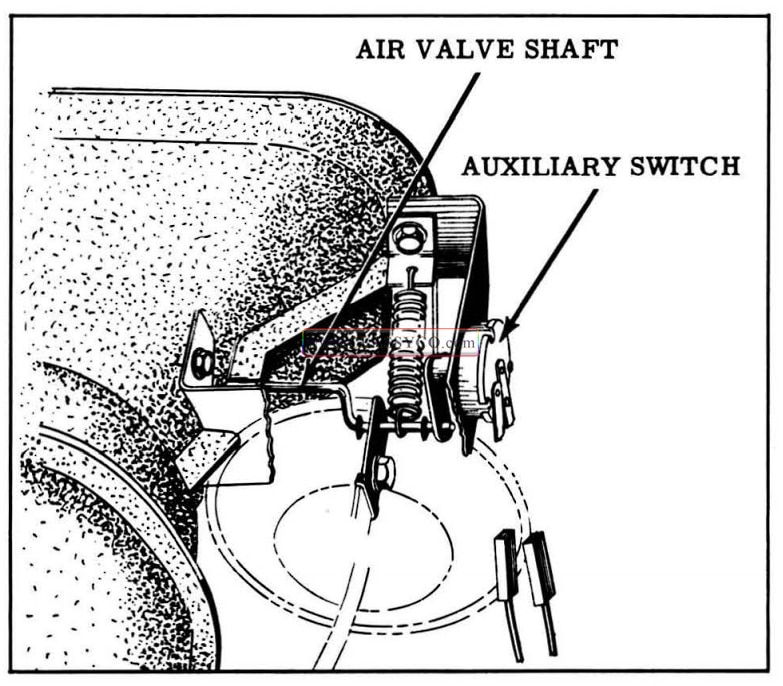 Adjustment of the air valves and diaphragm linkages is provided at the diaphragm.

The upper and lower air valves on the left side are connected by a link, and are operated by a single diaphragm.

The upper end of the left hand air valve link has four holes for adjustment. The proper hole is selected as follows: 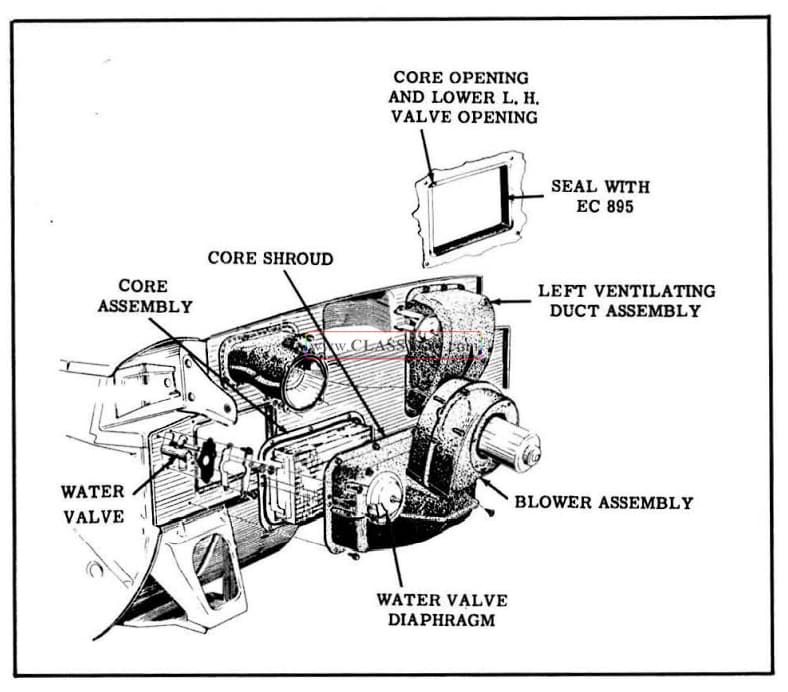 The blow er motor may be removed for servicing or replacement without removing entire blower assembly as follows:

To replace, reverse sequence of operations.

If car is equipped with Autronic-Eye, all wiring leading to units mounted on left hand duct assembly must be disconnected. After reassembling duct assembly, be sure wiring terminals are connected at proper places. 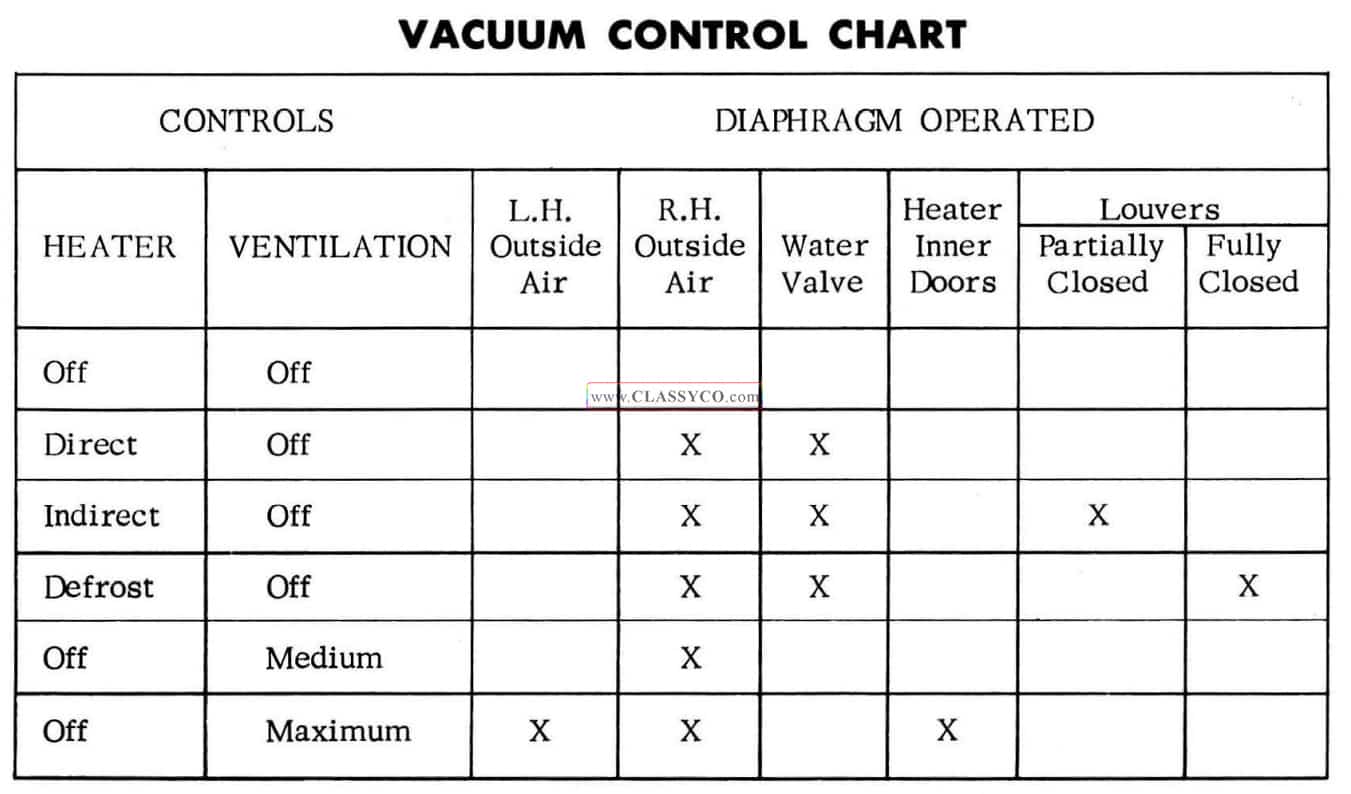 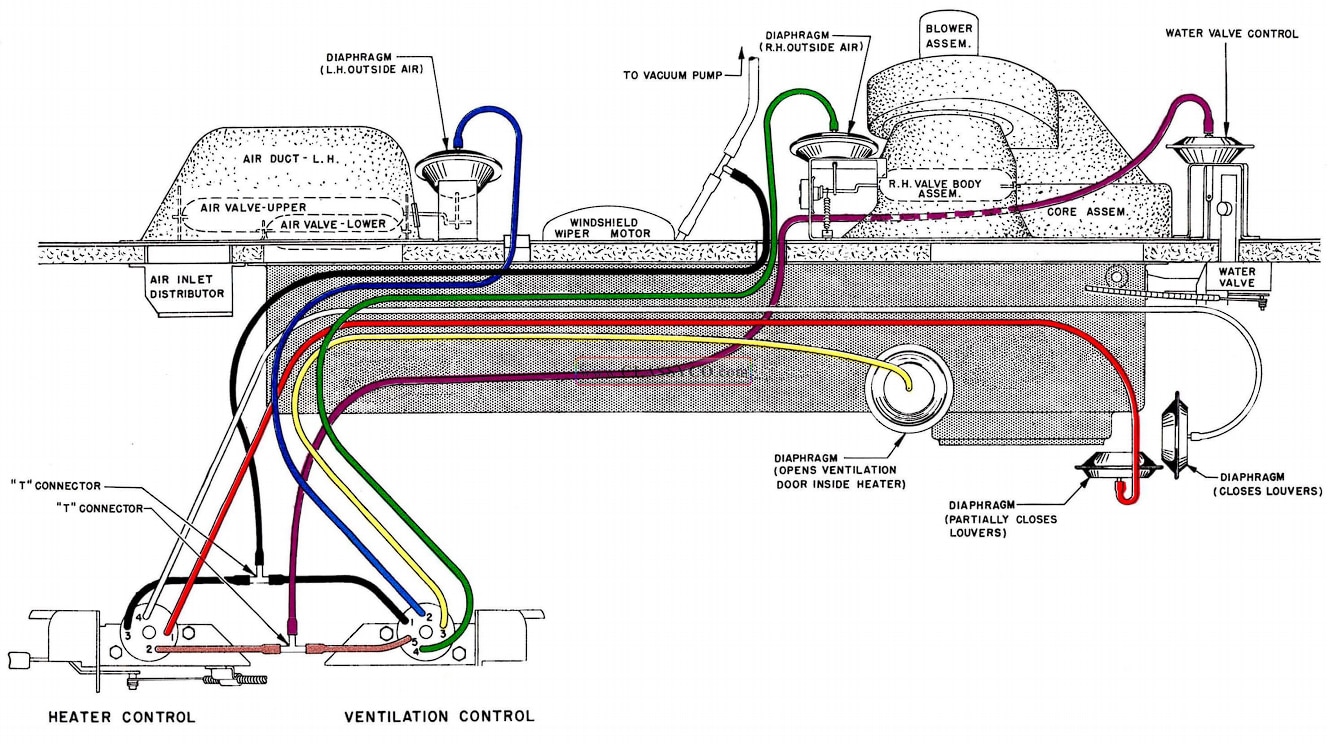 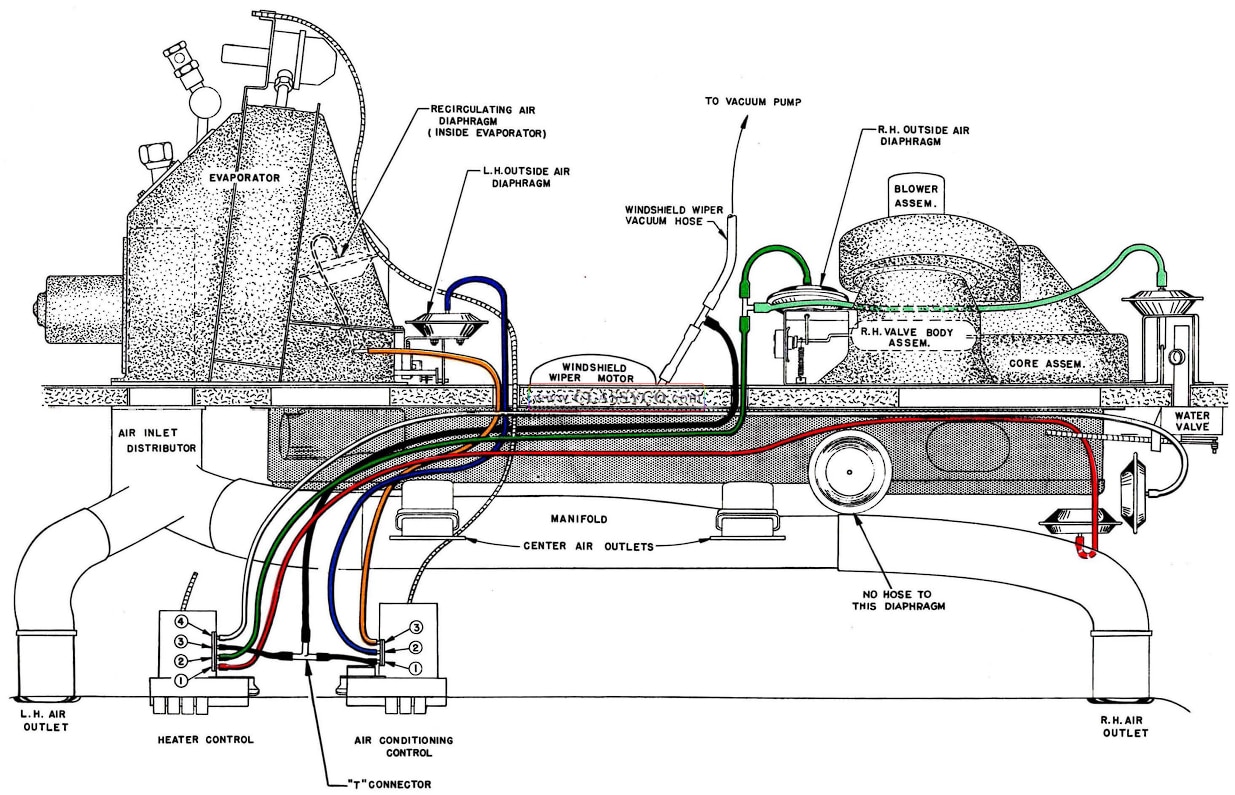 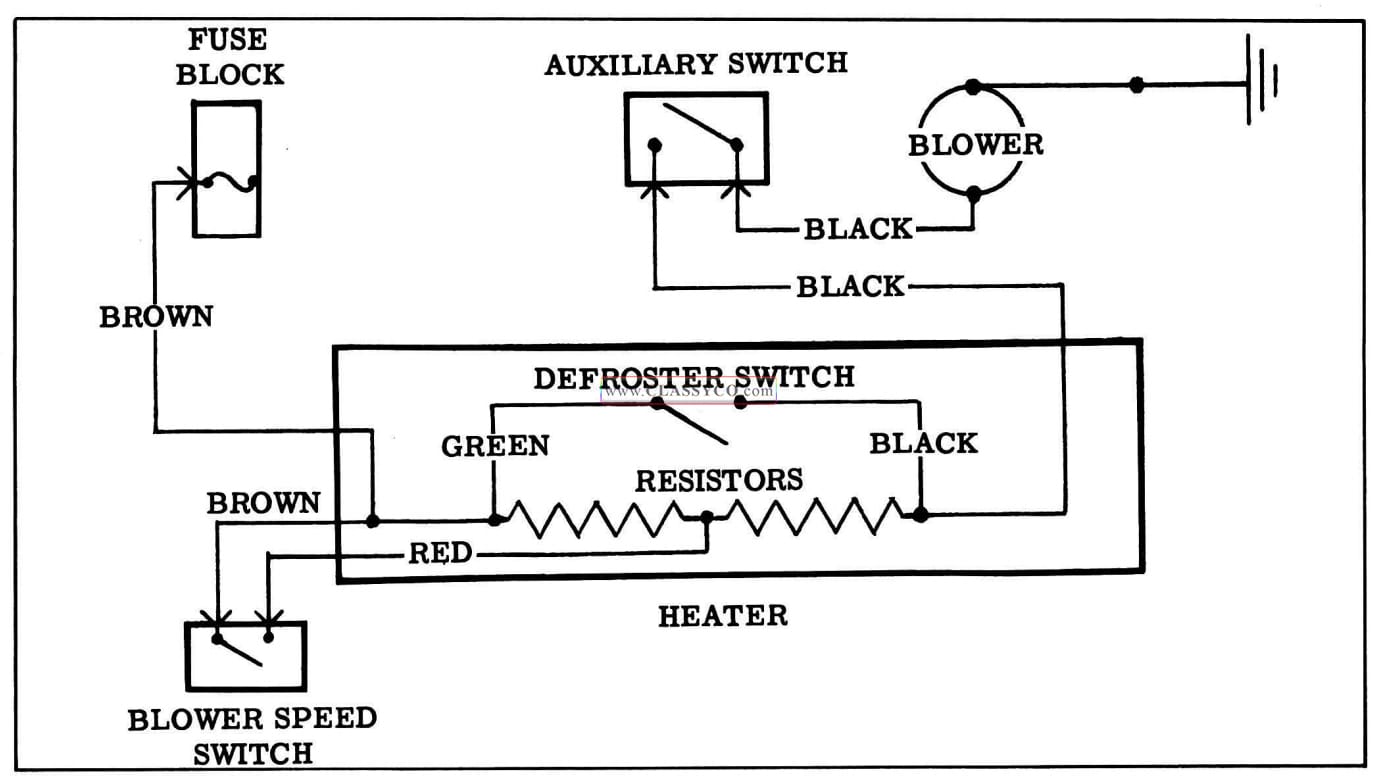