The 1957 instrument cluster is of the printed circuit type which eliminates external wiring at each component of the cluster. All of the electrical instruments and lights are connected to the wiring harness by a plug located at the rear of the cluster.

All the instruments in the cluster are electrically operated, except the speedometer and Hydra­ Matic indicator, which are mechanically operated.

The generator, temperature, and oil pressure indicators use colored lights to warn the driver of conditions other than normal when the engine is operating at speeds above idle. 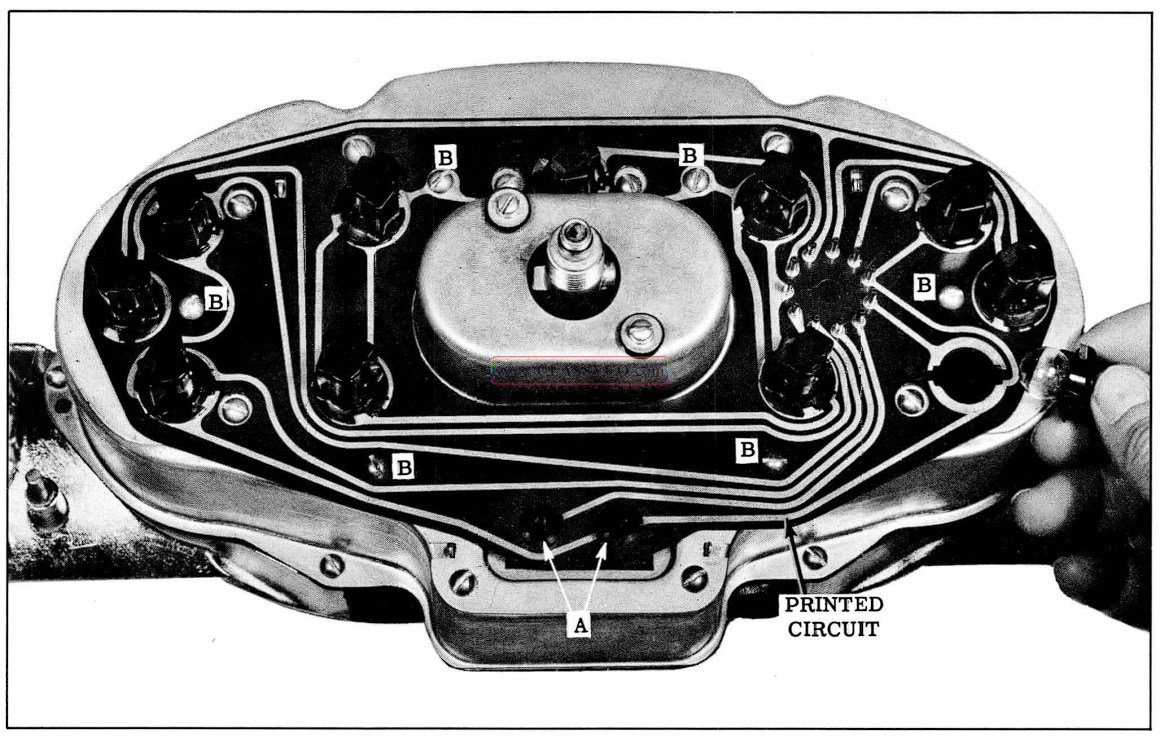 NOTE: Repairs of the printed circuit are NOT recommended. Whenever the circuit develops an open or short, the entire circuit should be replaced as outlined below:

To install, reverse the above procedure.

The fuel gauge and/or speedometer housing can be removed after the printed circuit has been removed.

To remove the H-M indicator needle, remove upper clamp from mast jacket bracket, loosen the Allen set screws on the shifter tube, then carefully guide the needle from the instrument cluster. To install, reverse the above procedure, using extreme care to prevent damage to the needle. Move selector lever through entire range to check for needle interference. Adjust as outlined below. 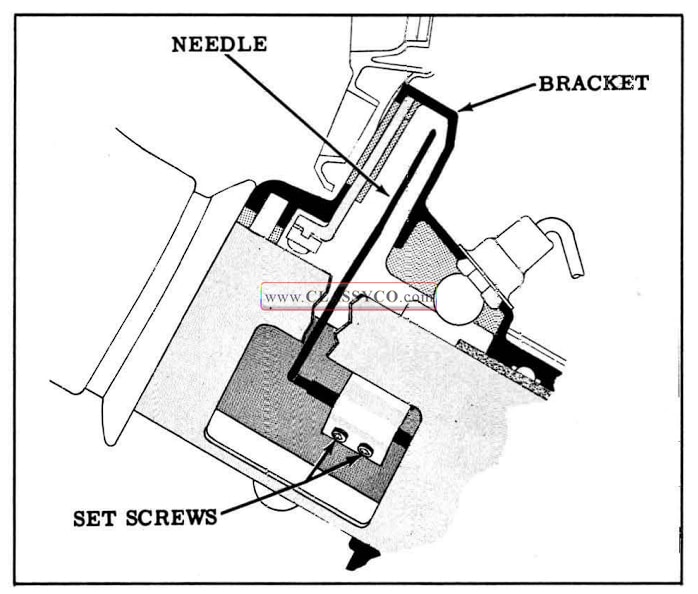 The instrument panel molding consists of two end sections and a center section.

To remove the end moldings, remove the attaching sheet metal screw, then slide the molding away from the instrument cluster (L.H. molding) or from the center section (R.H. molding).

NOTE: When removing the L.H. molding, it is necessary to remove the windshield wiper control.

When installing center molding, be sure that anti-squeaks are properly installed. 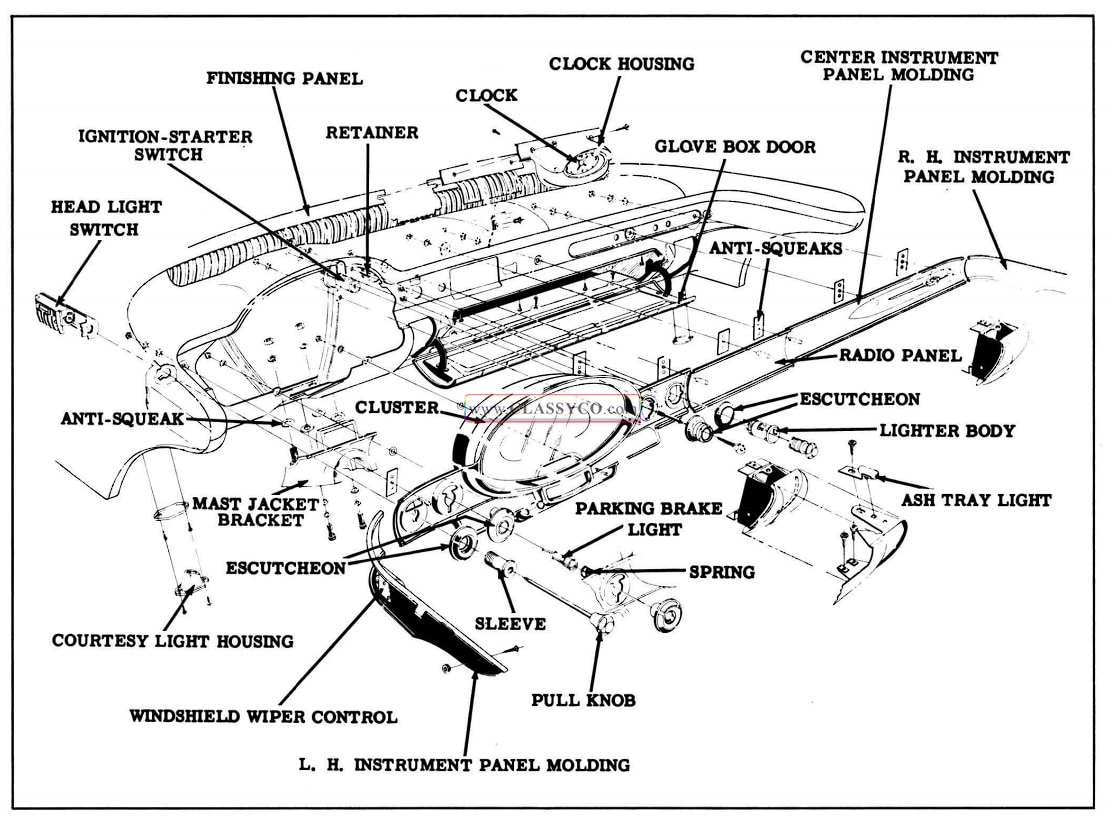 Ash tray light sockets are a push-fit in their housings, which are mounted above the ash tray housing on the instrument panel.

The parking brake light is mounted on the instrument panel. To remove, push in on the back of the unit to compress spring, and turn the socket counter-clockwise 1/8 turn.

All connections in the headlight switch are the push-in type, and are color coded.

A circuit breaker protects the parking and headlamp circuits. The tail lights are fused in the main fuse panel on the dash.

On cars equipped with Autronic-Eye the light switch incorporates an Autronic-Eye switch, located between the pull knob and escutcheon, which permits the selection of automatic or manual headlight control.

In order to replace an air control knob, cable, or bracket, (on cars not equipped with air conditioning or heater) it will be necessary to replace the complete assembly.

To install, reverse the above procedure

The dial light is mounted in a long flexible socket which is inserted through the left side of the receiver. The serial number plate is located on the bottom of the receiver chassis and is visable through a slot in the glove box. 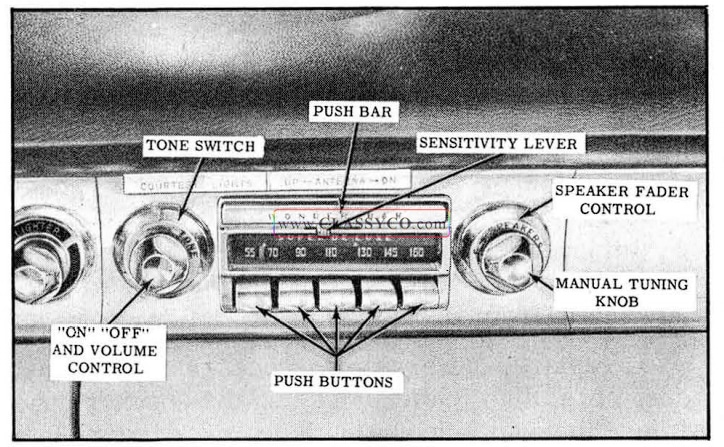 Both the Deluxe and Super Deluxe models have 5 push buttons for touch tuning, which mechanically tunes the radio at pre-selected stations, and a control knob for manual selection of stations.

Adjustment of the mechanical push button tuning system on the Deluxe and Super Deluxe models are the same.

To remove the Deluxe or Super Deluxe model radio receiver, proceed as follows:

To replace receiver, reverse the above procedure.

To replace switch, reverse sequence of operations. Be sure to route wiring lead above cluster to provide clearance.

To remove the front speaker, disconnect the speaker leads and remove the 2 speaker to baffle attaching screws.

To replace, reverse sequence of operations. 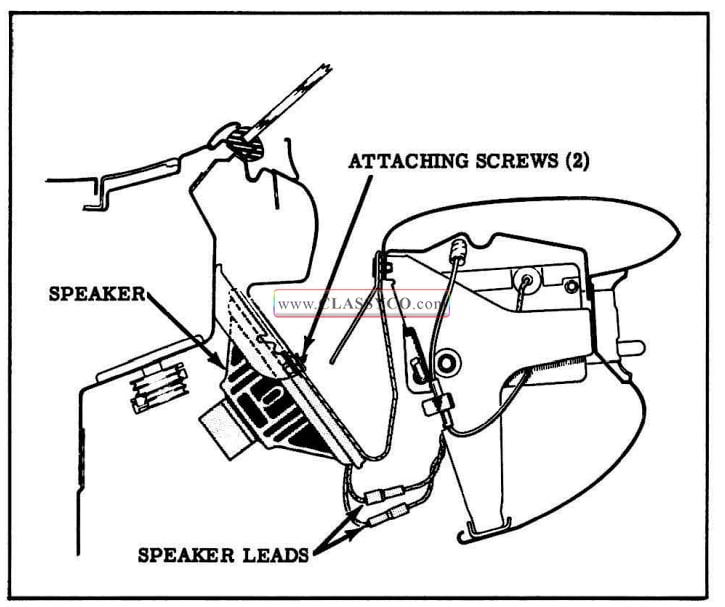 The rear seat speaker is mounted under the parcel shelf, and is accessible through the trunk compartment. To remove speaker:

To replace, reverse sequence of operations, being careful to avoid damaging the speaker cone while aligning the mounting holes over the mounting screws.

NOTE: On “98” models the speaker mounting studs are welded to the parcel sheIf and no speaker bezel or screen is required. 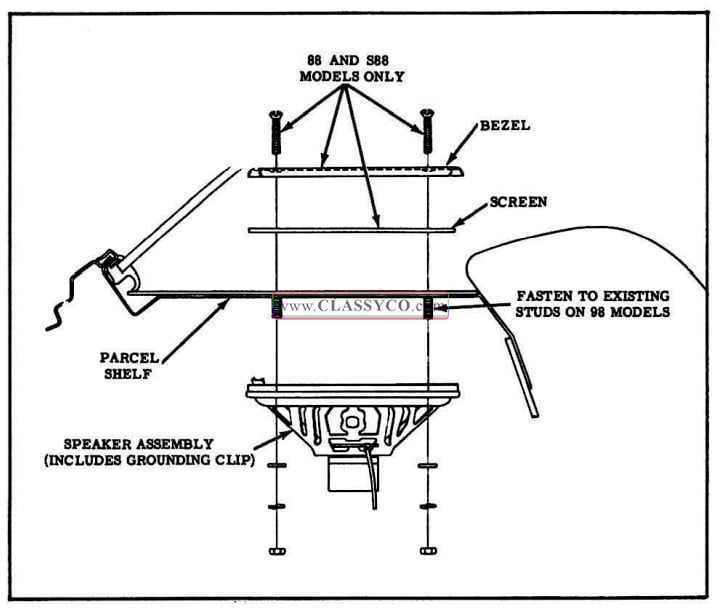 To check antenna for partial short, remove lead-in from side of receiver and check resistance from lead-in connector to a good ground using an ohmmeter. Resistance should be 3 megohms or more.

To remove the antenna mast, loosen the antenna cap nut and lift the mast out of socket. To remove antenna socket and lead-in, proceed as follows:

To replace antenna, reverse sequence of operations. Be sure metal is clean where antenna brace attaches to inside ledge of fender. Position antenna so that it tilts back slightly. Tighten brace screws, then tighten thin nut. The cap should be turned down finger-tight to prevent water entering the antenna socket and resulting in poor reception. 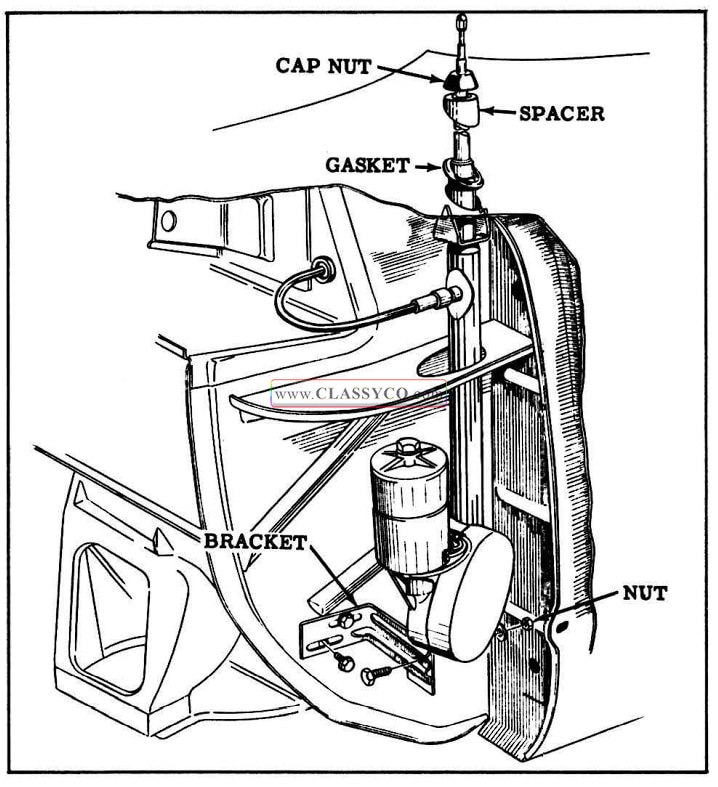 If antenna will not lower after the above measures have been taken, it will be necessary to cut off mast above cap nut.

If antenna fails to operate, check for the following possible sources of trouble.